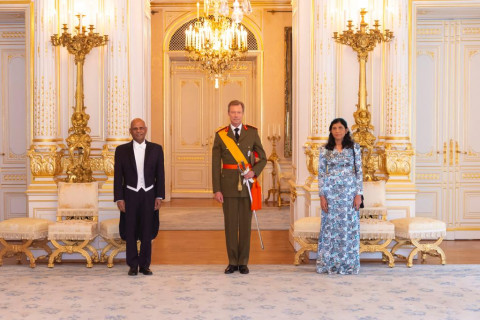 During the meeting held after the formal ceremony, the Grande Duke welcomed Ambassador Sobir and congratulated him on his appointment.

Ambassador Sobir conveyed warm greetings and good wishes from President Ibrahim Mohamed Solih and the people of the Maldives and briefed the Grand Duke on the situation of Covid-19 in Maldives, including the measures the Government of Maldives has taken to overcome the crisis.

During his visit to Luxembourg, Ambassador Sobir met with the Deputy Director of Political Affairs at the Ministry of Foreign and European Affairs of Luxembourg, Olivier Baldauff and discussed on further strenghthening the bilateral relations between the two countries. Ambassador also met with Luca Lazzaroli, Director General, Deputy Head of Operations of European Investment Bank (EIB) and discussed on new initiatives of EIB and their continuous support to Maldives.