News China donates 200,000 doses of Sinopharm vaccine to the Maldives

The Maldives has received the first batch of the 200,000 doses of the Sinopharm vaccines donated by the Government of the People’s Republic of China 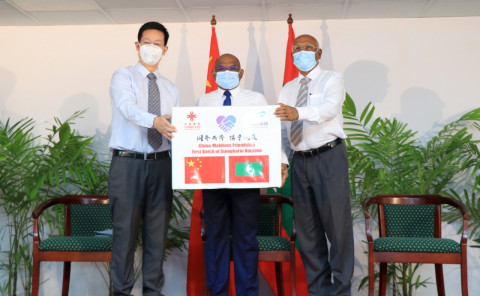 Speaking at the ceremony, Minister Shahid on behalf of President Ibrahim Mohamed Solih, the Government and the people of Maldives, thanked President Xi Jinping, the Government and the people of China for their generous contributions towards the Maldives fight against the Covid-19 pandemic, especially its vaccination programme. He also thanked Island Aviation Services Limited (IAS) for their efforts to bring the vaccines from China to the Maldives, and also the Chinese companies operating in the Maldives for their generous financial contributions towards covering some of the costs of the flights.

In his remarks, Ambassador Zhang Lizhong noted that both countries enjoy close relations and that China will continue to assist the Maldives in both its vaccination efforts, and in its economic recovery. He mentioned that the donation of the 200,000 vaccines is a symbolic gesture of that close bilateral relationship.

The Government of Maldives made a strong commitment to vaccinate the entire population without discrimination, irrespective of their nationality, status of residency or where they live in the Maldives. The Government’s intention was to bring the vaccines to the Maldives in the shortest possible timeframe. Following the issuance of the Emergency Use Approval for the Sinopharm vaccine by the Maldives Food and Drug Authority (MFDA) on 14 March 2021, the Government was able to bring the vaccines to the Maldives on 24 March 2021, in exactly 10 days’ time. This is to ensure that the ongoing vaccination programme continues without any interruptions. The second batch of the remaining 100,000 doses of the Sinopharm vaccines are due to arrive in the Maldives on 30 March 2021.

The ceremony was attended by His Excellency Ahmed Naseem, Minister of Health who also spoke at the event and thanked the Chinese Government for their generous contributions. Officials from the President’s Office, Ministry of Foreign Affairs, Ministry of Health, and Island Aviation Services Limited, and representatives of Chinese companies operating in the Maldives were also in attendance.