Ambassador Zhang is the 3rd Ambassador of China since the opening of Chinese Embassy in Maldives in 2011. 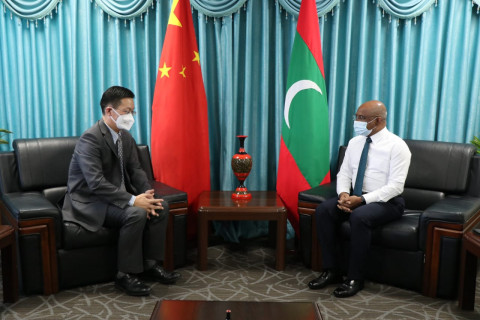 Foreign Minister Shahid conveyed his sincere gratitude and appreciation for the immense efforts made by the Ambassador to strengthen bilateral ties between Maldives and China, and the generous support he had extended to the Maldives during his ambassadorial tenure.

Ambassador Zhang expressed his positive sentiments, and reiterated his own commitment to continue working closely with the Government of Maldives in all aspects of the bilateral relationship between the two countries. He mentioned that he found the Maldives and the Maldivian people to be hospitable and unique, and thanked the Government for the support it had extended to the friendly people and the Government of China.

Foreign Minister Shahid acknowledged the warmth and affection with which the Maldivian people have come to regard the Ambassador due the efforts he has taken to facilitate development in the country and for his active engagement with the local community. He personally thanked the Ambassador for his efforts in assisting the Maldives during the COVID-19 pandemic. Foreign Minister Shahid mentioned that while he wishes the Ambassador good fortune and success in all his future endeavors, he will always be welcome to visit the country again as a friend of the Maldives.