From Ministry of Home Affairs 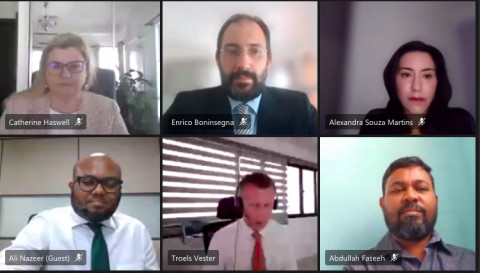 Minister of State for Home Affairs Ali Nazeer has stated the government believes that the community and the state have a responsibility towards children associated with violent extremist groups. He made this statement while addressing the inaugural ceremony of the virtual capacity building event organised by UNODC on Children Associated with Terrorist & Violent Extremist Groups in the Maldives.

Acknowledging the presence of children belonging to Maldivian families in Syrian refugee camps, the State Minister expressed the government’s firm belief that despite the types and extent of their conflict with the law, every child is entitled to a decent life.

“For this reason, the Maldivian government is committed to repatriate, rehabilitate and reintegrate Maldivian children in conflict zones and children associated with these groups locally,” he added. He noted that Maldives had requested to be the first pilot country in the world to implement the UNODC Roadmap on the treatment of children associated with terrorist and violent extremist groups, and highlighted the government’s efforts to build the capacity of relevant institutions to facilitate the process.

In addition to the State Minister, United Nations Resident Coordinator in the Maldives, Cathrine Haswell, Coordinator of UNODC's Global Programme to End Violence Against Children, Dr Alexendra Souza Martins and representatives of stakeholder institutions participated in the event.