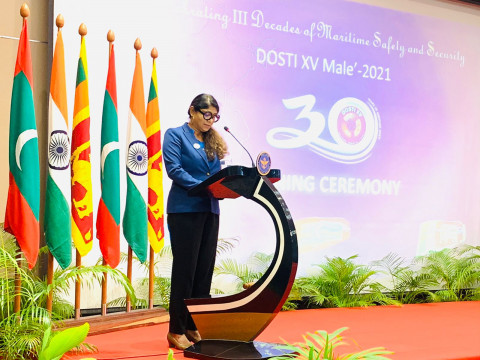 Minister of Defence Uza. Mariya Didi said the enduring 30-year legacy of the bienniel Trilateral Joint Exercise Dosti between the Maldives, India and Sri Lanka, represents the tradition of goodwill and amity between the 3 countries, and their firm commitment to enhancing maritime security cooperation.

The Minister made the remarks at the opening ceremony of the 15th Trilateral Joint Exercise "Dosti XV" held on Sunday morning at Crossroads Maldives.

Minister Mariya said, apart from the skills and knowledge gained, the lifelong bonds of friendship are the lasting essence of these consistently rewarding and highly fulfilling trainings, which mirror the meaning of the name "Dosti" itself.

The Minister noted that such Exercises serve to boost goodwill between neighboring states, as much as it does at the soldier-to-soldier and sailor-to-sailor level.

The Minister assured the Maldives' neighbors that President Solih’s government remains engaged in fostering regional arrangements and endeavors that help bolster security and prosperity in the nation's vicinity.

Seychelles and Bangladesh are taking part in "Dosti XV" as observers.