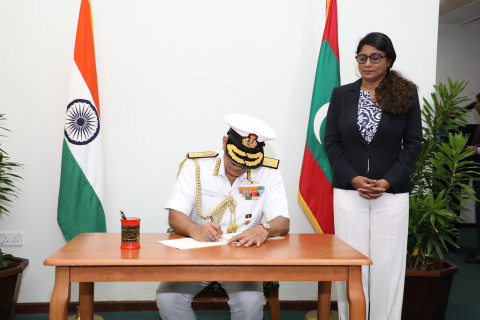 During the meeting held at the Ministry of Defence, discussions focused on ways to further boost cooperation between MNDF and Indian Navy, in the area of maritime information sharing, maritime domain awareness, bilateral maritime agreements and capacity-building initiatives.

Minister Mariya highlighted that India-Maldives defence and security partnership was at its pinnacle, and thanked India for providing swift, unconditional support to the Maldives at all times.

Minister Mariya thanked the Indian Navy for facilitating the transport of medicines and hospital consumables to Maldives during the COVID-19 pandemic.

Minister Mariya noted the promptness with which India submitted the Detailed Project Report (DPR) of the Coast Guard Harbour and Dockyard to Maldives, the review of which will be completed soon.

Minister Mariya expressed appreciation for the continuous assistance and support rendered by the Indian Navy in maintenance and repair of MNDF Coast Guard Fleet.

Minister Mariya expressed confidence that training and joint exercises such as EKATHA will continue between MNDF and the Indian Navy, enhancing existing positive relations and interoperability.