Ex. Lantern Metal yet another testament to the strong partnership between Maldives - US defence forces: Minister Mariya 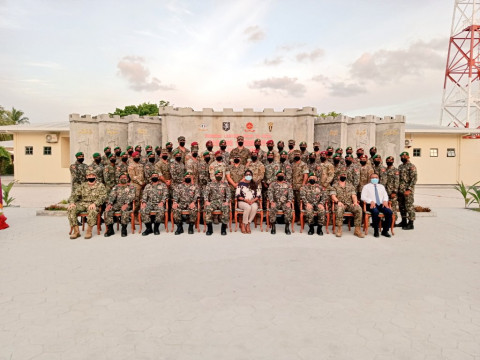 Minister Mariya highlighted that Exercise Lantern Metal was a testament to the strong, time-tested partnership between the defense forces of the Maldives and the United States, which signed a Defence Framework Agreement last year, further boosting defence cooperation between the two countries.

The joint exercise conducted by a 11-member contingent from the US Armed Forces trained a total of 36 MNDF soldiers, in skills such as Combat Marksmanship, Counter-IED and Maritime Interdiction Operations.

The exercise also included a Human Rights Training component, which the Minister said was highly essential and contextually relevant, given that human rights is a key pledge of Commander-in-Chief HEP Ibrahim Mohamed Solih’s administration, and the state is engaged in a process of democratizing the MNDF.

The Minister also conveyed her condolences to the US Armed Forces and the families and loved ones of the Service Members who lost their lives and sustained injuries in the Kabul blasts on 26 August.

Minister Mariya expressed hope that Afghanistan would keep moving ahead on its path to fully ensure women’s rights and freedoms, as enshrined in the 2004 Constitution.