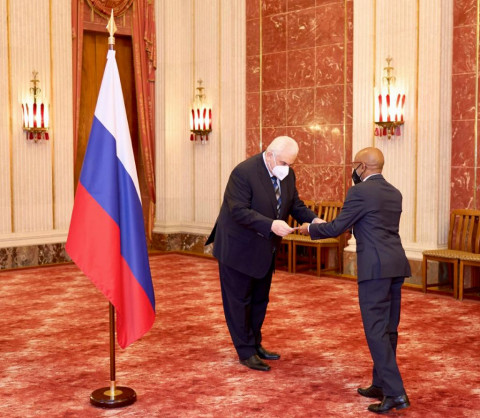 Ambassador of Maldives to the Federal Republic of Germany, His Excellency Ahmed Latheef presented his Letters of Credence, as the Non-Resident Ambassador Extraordinary and Plenipotentiary of the Republic of Maldives to the Russian Federation at a ceremony held at the Russian Embassy in Berlin today. His Excellency Sergey Nechaev, Ambassador of Russia to Germany, received the Letters of Credence issued by H. E. Mr. Ibrahim Mohamed Solih, President of the Republic of Maldives addressed to H. E. Mr. Vladimir Putin, President of Russia, under a special arrangement made due to the difficult Covid-19 pandemic travel restrictions.

During the meeting that followed the Credential Ceremony, Ambassador Nechaev congratulated Ambassador Latheef on the presentation of credentials as the first non-resident Ambassador from Maldives to Russia and expressed confidence that the long-standing ties between the two countries will be further strengthened during his tenure. Ambassador Latheef expressed his commitment to work closely with the Russian Government to enhance the bilateral relationship between both countries.

Ambassador Latheef also stated that the Government of Maldives is grateful for the significant contributions Russia has made towards the socio-economic development in the Maldives, particularly in the field of tourism. Tourism is the largest economic industry of the Maldives and Russia has always been a key tourism market, currently holding the second position of the tourist arrivals in the country with a total number of 222, 424 Russian tourists in 2021.