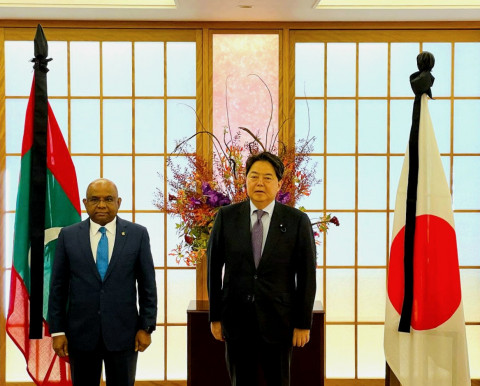 The Minister of Foreign Affairs of Maldives, Abdulla Shahid met with the Minister of Foreign Affairs of Japan, Hayashi Yoshimasa, in Tokyo today.   During the meeting, Minister Shahid conveyed condolences on behalf of President Ibrahim Mohamed Solih and himself, on the untimely demise of Former Prime Minister Abe Shinzo, who was an instrumental figure in the elevation of Maldives–Japan partnership during his premiership.   The two ministers reflected on the close historical relationship between Maldives and Japan. The ministers also exchanged views on key areas of bilateral and multilateral interest.   In commemoration of the 55th anniversary of the establishment of diplomatic relations between the two countries, both ministers reaffirmed their commitment to further enhance the partnership bilaterally, through economic and development cooperation and in the international fora.   Foreign Minister Shahid is on an official visit to Japan as the Special Envoy of President Ibrahim Mohamed Solih, to attend the State Funeral of Former Prime Minster Abe Shinzo.