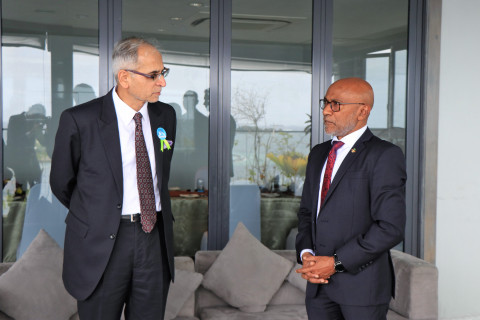 Following productive discussions, the exchange of agreement signed between the Government of Maldives and EXIM bank of India to extend USD 100 million Line of Credit for the purpose of facilitating the numerous ongoing infrastructure projects in the Maldives took place in a special ceremony held at the Ministry of Foreign Affairs. A sea vessel procured for the Maldives Correctional Service under the 106 Million Indian Grant Assistance scheme signed in March 2019, was also handed over at the ceremony. Additionally, at a ceremony held at the Ministry of Defence, Foreign Secretary of India handed over 24 utility vehicles to the Maldives National Defence Force.

During his visit, Foreign Secretary of India also visited the site of the ongoing Greater Malé Connectivity Project to witness its progress. Overall, the Foreign Secretary concluded a very productive and successful visit in which the dynamic and long-standing relationship between Maldives and India effectively grew stronger and closer.