News Disaster risk mitigation, adaptation and resilience are directly linked to the Government’s overall vision for the defence of Maldives – Minister Mariya 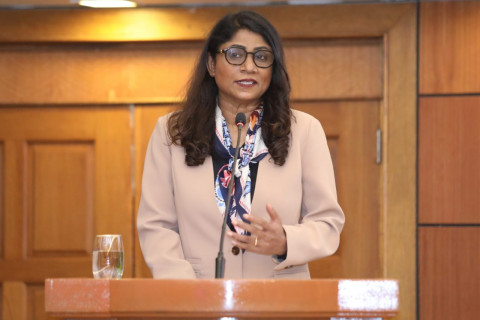 Minister of Defence Uza. Mariya Didi has said that disaster risk mitigation, adaptation and resilience are directly linked to the Government’s overall vision for the defence of Maldives, and that the Maldives needs the support of its international partners to realize this vision.

In her remarks, Minister Mariya noted that global warming with its related impacts is an existential threat for the Maldives, with an increase in reported incidences of damage due to floods, strong winds, swells, storm surges and other extreme weather events. The Minister also noted that incidents of chemical fires and ships running aground can have a significant impact on the country’s urban and natural environments. The Minister noted the importance of multi-agency coordination in responding to such emergencies.

The Minister thanked President Ibrahim Mohamed Solih for instituting the National Disaster Management Authority as stipulated in the Statute and empowering NDMA to work independently with their own budget and planning priorities.

The Minister also thanked the US Government, the US Indo-Pacific Command and the CFE-DM for the prompt response in prioritizing the Maldives’ request and making this programme a reality within 6 months.

“Maldivians are a resilient people. We accept our geographic uniqueness. Our struggle is to protect our islands for future generations through effective adaptation and mitigation measures. I am mindful that those present here are disaster managers and responders; and our focus is on swift, efficient and coordinated response when disasters strike,” concluded Minister Mariya.