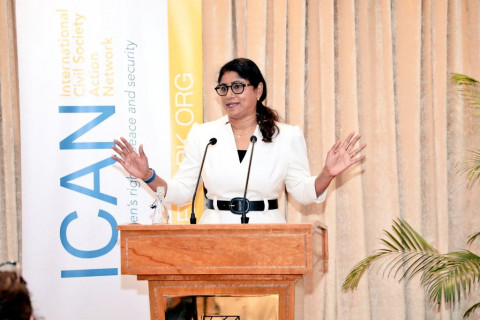 Minister of Defence Uza. Mariya Didi has stated that, if women are to make their mark in any field, they have to understand that resilience is the magic ingredient of lasting change and that they should not give up.

The Minister made the statement whilst addressing the opening ceremony of the International Civil Society Action Network (ICAN)’s 9th Women, Peace and Security Forum being hosted in Bandos Maldives.

Addressing the ceremony, Minister Mariya highlighted the importance of women not giving into their emotions under distress or pressure and exiting the change-making process. The Minister expressed her heartfelt gratitude for the efforts of civil society leaders like the ICAN co-founder Ms Sanam Anderlini, who had worked tirelessly to give women their rightful place in the peace and security debate by contributing to the accomplishment of milestones such as the UN Resolution 1325.

“At the end of the day, we simply cannot and should not let our emotions come in the way of our mission. We must keep fighting this good fight for change if we are to reclaim power and restore peace”, said Minister Mariya.

“It is this commitment that is reflected in the landmark steps of appointing a record number of female Cabinet Ministers and Heads of Diplomatic Missions Abroad, reserving 33 percent of local council seats for women, empowering Women’s Development Committees in all inhabited islands and appointing two female Justices to the Supreme Court, among others,” said Minister Mariya.

The Minister also noted that Maldives had made significant progress in increasing women’s participation in the defence sector, including representation at the highest decision-making level within the defence force and all Executive Committees within the MNDF, and an increased number of training opportunities for women personnel.

The 4-day forum being hosted by ICAN in partnership with Addu Women’s Association (AWA) Maldives, brings together women peacebuilders and policy practitioners from over 40 countries.