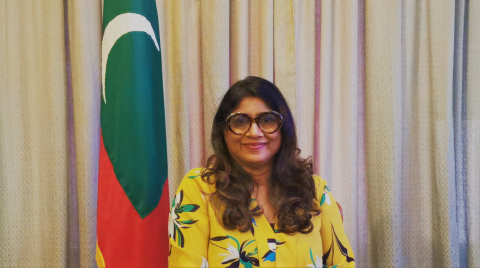 In a video message, Minister Mariya highlighted the immense role played by migrants in building the Maldivian society over the years, and paid tribute to their hard-work and sacrifices in the Maldives and beyond.

As the Minister overseeing Maldives Immigration, Minister Mariya also reiterated the Government’s commitment to improving migration management, so as to ensure safer and more orderly migration.

Reiterating Ibrahim Mohamed Solih’s commitment to put an end to human trafficking, the Minister highlighted efforts made by the Government in this regard, starting with the Maldives National Anti-Human Trafficking Action Plan passed by the Cabinet in February.

Launching the #EndHumanTrafficking social media campaign, the Minister said it is vital to recognize the gravity of human trafficking as a crime against humanity, and to take concrete steps to prevent the menace and protect the victims, even in these challenging times.

After shifting the anti-human trafficking mandate to the Ministry of Defence in late 2019, the Government has taken key steps, including the streamlining and reappointment of the National Anti-Human Trafficking Steering Committee, the appointment of a Director of Anti-Human Trafficking at MOD, the designation and preparation of a location in Gulhifalhu for setting up a victim shelter, the confirmation of funds from the 2021 State Budget to establish an Anti-TIP Office in January and ongoing efforts to align the Prevention of Human Trafficking Act with international protocol before the end of February, and to develop guidelines for victim assistance and shelter services.