Japan donates 112,000 doses AstraZeneca vaccines to the Maldives through COVAX 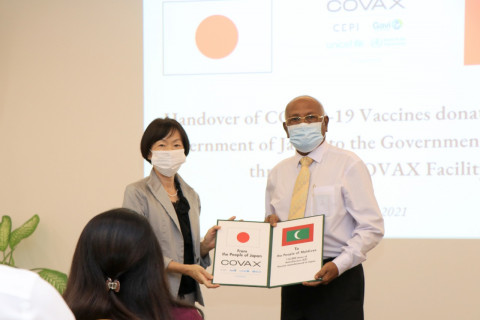 Japan has donated 112,000 doses of the AstraZeneca COVID-19 vaccines to the Maldives through the WHO Covax Facility, as part of Japan’s “Last One Mile Support” initiative. His Excellency Ahmed Naseem, Minister of Health, received the vaccines on behalf of the Government of Maldives at a ceremony held today at the Ministry of Foreign Affairs.

Speaking at the ceremony, Minister Naseem thanked the Government of Japan for their generous donations, not only in providing the vaccines but also in donating medical equipment, medical supplies and other assistance given to the Maldives and the Maldivian people throughout the pandemic. He mentioned that this donation of AstraZeneca vaccines will contribute towards the Government’s efforts to continue vaccination across the country and will support the goal of completing the vaccination programme for the entire eligible population.

Her Excellency Keiko Yanai, Ambassador of Japan to the Maldives also spoke at the ceremony and highlighted the friendly and historic ties between the two countries. She mentioned that Maldives is an important bilateral partner of Japan, and reiterated its continued support to the Maldives during its times of need.

This donation is the fourth COVAX allocation to the Maldives. Earlier in August, the United States donated 128,700 doses of Pfizer vaccines through the WHO Covax Faculity which are being administered presently.