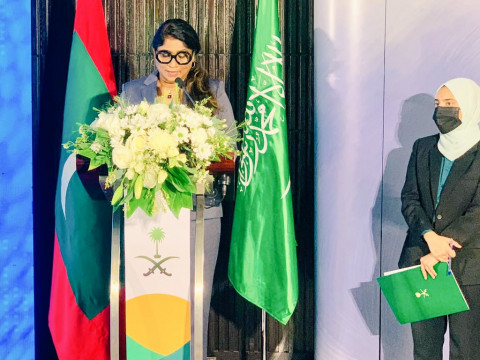 Minister of Defence Uza. Mariya Didi has reiterated Maldives’ commitment to exploring further avenues of cooperation with Saudi Arabia, especially in the Defence and Security domain, and pledged Maldives’ support to the Kingdom’s ongoing reform process.

The Minister made the remarks, honoring the function held at Hotel Jen in Male’ on Thursday evening to mark Saudi Arabia’s 91st National Day.

Noting that this year marks the 40th anniversary of Maldives-Saudi Arabia diplomatic relations, Minister Mariya expressed gratitude for the immense generosity of the Government and friendly people of Saudi Arabia, reflected in the many development projects being supported by the Saudi Fund for Development.

The Minister said these were important steps forward in the realization of President Solih’s “Zero Tolerance on Terrorism” policy, whilst serving as confirmation of the two countries’ ever-growing ties of friendship and cooperation, especially in the Defence and Security domain.

Minister Mariya commended the Saudi leadership’s ongoing drive for reform, especially in elevating the position of women in society, and pledged the Maldives’ support to the process of change, which requires energy and synergy.