News UK Minister of State for South and Central Asia, the UN and the Commonwealth Lord Tariq Ahmad of Wimbledon pays courtesy call on Minister of Defence Uza. Mariya Didi 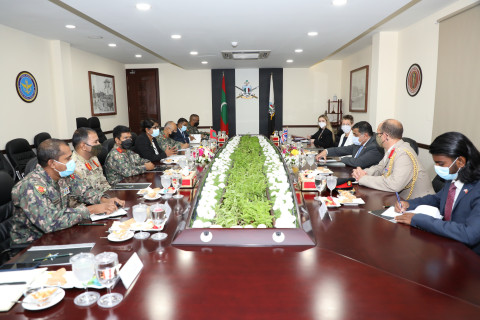 UK Minister of State for South and Central Asia, the UN and the Commonwealth Lord Tariq Ahmad of Wimbledon has paid a courtesy call on Minister of Defence Uza. Mariya Didi.

During the meeting held at the Ministry of Defence, Minister Mariya thanked the UK Government for the excellent cooperation and assistance extended to the Maldives, especially in the Defence and Security Sector, signaling fresh impetus to a positive diplomatic trajectory in the past 3 years.

The Minister welcomed the opening of a new chapter in the two countries’ age-old security relationship, after a gap of over 10 years, in the form of training programs and exercises with the MNDF.

The Minister noted that, despite COVID-19, Britain opened up its prestigious military institutions to Maldivian servicemen, allowing the continuation of a tradition that has produced key leaders including many General Officers.

Further discussions were held on boosting UK-Maldives cooperation in key areas of mutual interest, such as counterterrorism, aviation security, humanitarian assistance, and narco-trafficking.

The UK Minister of State Lord Ahmad highlighted the UK Government’s commitment to boosting cooperation with the Maldives, and welcomed the Maldivian Government’s interest in fostering human rights and democracy.