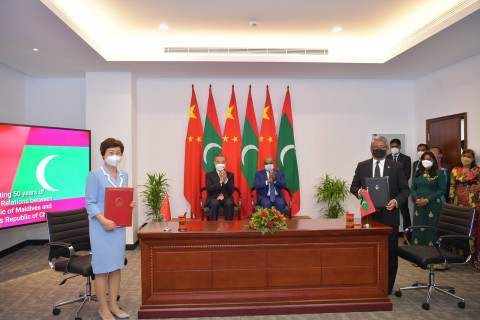 His Excellency Mohamed Aslam, the Minister of National Planning, Housing and Infrastructure signed on behalf of the Government, a “Letter of Exchange on the Feasibility Study of Management and Maintenance of China-Maldives Friendship Bridge”. His Excellency Akram Kamauludeen, Minister of State for National Planning, Housing and Infrastructure also signed a “Supplementary Contract to the Implementation Contract for China Aided Micro-Grid Sea-water Desalination Project in the Maldives”.

Finally, His Excellency Ahmed Naseem, Minister of Health, signed the “Agreement on Establishing a Hospital Assistance and Cooperation Programme between the Ministry of Health of the Republic of Maldives and the National Health Commission of the People’s Republic of China.”

The agreements signed today, will directly benefit the people of Maldives, improving their quality of health services, providing additional outlets for sea water desalination, and by assisting the Government with the maintenance of the flagship China-Maldives Friendship Bridge.