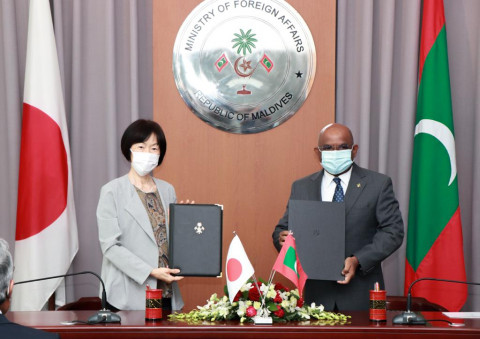 The Maldives and Japan today signed the Exchange of Notes under the Economic and Social Development Programme of the Government of Japan, for a grant aid of 800 million Japanese Yen (USD 7.6m) to be extended to the Maldives Coast Guard and the Maritime Rescue and Coordination Center.

The grant aid will be utilized to further strengthen the capabilities of the Maldives Coast Guard, the Maritime Rescue and Coordination Center, Sub-Regional Centers and Vessels. This includes the provision of communications equipment, professioanl search and rescue dive equipment to be used by the Maldives Coast Guard during search and rescue operations.

While speaking at the ceremony today, Minister Shahid highlighted the close relations the Maldives enjoys with Japan, and the need for coordinated action in collaborating more closely on combating piracy, countering violent extremism and narco-trafficking, and to ensure a free and open Indian Ocean that would bring about peace and prosperity to the region. Minister Shahid also thanked Ambassador Yanai for her committment to further enhance the close relations between Maldives and Japan, and expressed his gratitude to the Government of Japan for yet another important gesture of goodwill and generosity to the Maldives.

The signing of the Exchange of Notes symbolises the close ties and coordination between the two countries on rescue services and crisis management. In October last year, Japan donated 21 paremedic ambulances to the Maldives health sector in value of USD 1.4 million, which were distributed to 21 islands in 15 atolls.