Ministry of Islamic Affairs Dr.Ahmed Zahir Ali participated in “ With Peace Against the Occupation” online conference held in Jerusalem. This conference was hel 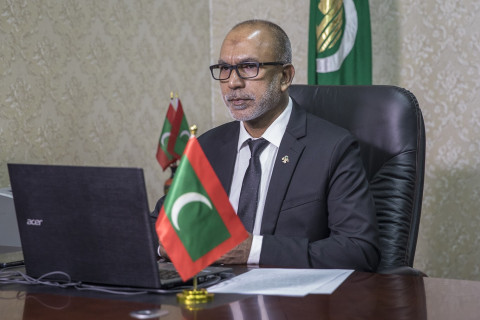 Ministry of Islamic Affairs Dr.Ahmed Zahir Ali participated in “ With Peace Against the Occupation” online conference held in Jerusalem. This conference was held yesterday 4:45pm.

Addressing in the conference, Minister emphasized that the issue of Palestine is significantly important. Since it is part of our Aqeedha, as Masjidul Al-Aqsaa, one of our Qiblah is located in the land of Palestine, it is a religious obligation to protect from the hands of Israel.

Moreover, Minister stated that Maldives has always condemned the acts of Israel and talked against its violent actions that it takes against the Muslims of Palestine. To stress this point, Dr.Ahmed Zahir highlited the words that the president of Maldives, His excellency Ibrahim Mohamed Solih’s speech in 74th General Assembly of the United Nations. It goes as “Maldives will always stand unwavering in its support for the Palestinians, in their endeavor to achieve an independent and sovereign State".

Concluding his speech, Minister thanked the president of Palestine, His Excellency Mahmoud Abbas for his tireless efforts to bring harmony in the middle east crisis and especially the issue of Palestine. Also made Dhua that to make Palestine an independent state, save its people from the hands of Israel and provide the success shortly.

In addition to this, Minister thanked Palestine’s President Advisor for the Religious Affairs and Islamic Relation, Supreme judge of the Sharia Courts, His excellency Mahmoud Al Habash for inviting this conference.

Israel’s colonial plans aimed to at annex more Palestine lands, which severely endangers the Jerusalem and its Al-Alqsa Mosque. Hence this conference was conducted for scholars, thinkers and preachers around the world as it is more necessary and urgent to protect the land of Isra Miraj from the threats of the pies by occupation and conspiracies, by awakening anxiety, raising awareness, and mobilizing good efforts to protect justice and peace and to prevent injustice and aggression.