Minister Shahid delivered an intervention during the session on Access to Finance and Responding to Climate Impacts. 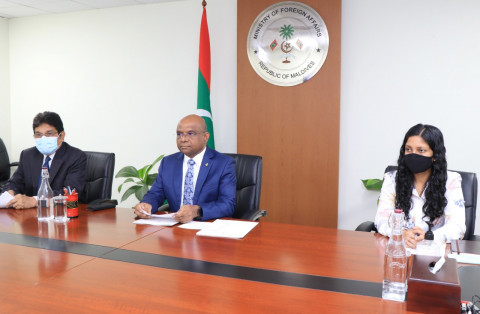 Minister of Foreign Affairs, Abdulla Shahid, today participated in the Climate and Development Ministerial meeting, hosted by the United Kingdom. The sessions were chaired by the Right Honourable Dominic Raab, Secretary of State for Foreign, Commonwealth and Development Affairs, and the Right Honourable Alok Sharma, COP26 President-designate. He was also joined by Ministers from Bangladesh, Bhutan, Fiji, India, Italy, Malawi, Sudan and Tuvalu along with other high-level participants, international financial institutions and civil society.

Minister Shahid delivered an intervention during the session on Access to Finance and Responding to Climate Impacts. He highlighted on the many negative impacts Small Island Developing States (SIDS) face due to climate change and how the lack of access to adequate, predictable and sustainable finance further adds to these challenges. He called to discontinue the application of criteria to prove ‘bankability’ of climate projects as small vulnerable countries do not have the scale nor capacity to fulfill such requirements. He also called for simplified financing options and to use the multi-dimensional vulnerability index.

Minister Shahid also delivered an intervention on Quantity, Quality and Composition of Finance, and Fiscal Space and Debt in relation to climate change. He noted the need for international support in changing the composition of finance, with a balance between funds available for adaptation and mitigation efforts. He further stressed that debt cancellations, suspensions, restructuring and swaps and other innovative financial instruments are possible solutions to alleviating debt burdens of SIDS. Finally, he called for scaled up finance in the lead up to COP26.

The Twenty Sixth Conference of Parties to the Untied Nations Framework Convention on Climate Change (COP26) will be held in Glasgow, United Kingdom from 1-12 November 2021. The Maldives stands ready to work with its international partners in raising ambition and momentum in the lead up to, and during, COP26.