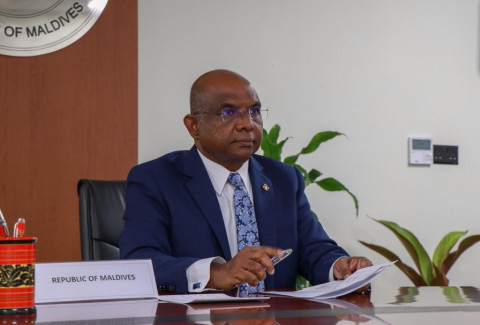 Minister of Foreign Affairs, Abdulla Shahid, today took part in the First Ministerial Meeting of the Media Freedom Coalition (MFC). The meeting was held virtually at the sidelines of the Second Global Conference on Media Freedom co-hosted by Canada and the Republic of Botswana, under the theme “Media Freedom in the Time of COVID-19”.

Speaking at the meeting, Minister Shahid said that a free and independent media is one of the cornerstones of a democratic and just society, that it gives a voice to the most disadvantaged and contributes to human progression. He also underscored the commitment of the Maldives towards the fundamental ideals adopted by the MFC and recalled the efforts of the Government to address the threats prevalent in the domestic sphere to the promotion of media freedom. In this regard, he noted that the bill ratified by President Ibrahim Mohamed Solih in 2018 to repeal the Defamation and Freedom of Speech Act, marked the end of a dark chapter in the Maldivian history.

Minister Shahid also elaborated on the efforts undertaken by the current administration to safeguard the independence of journalists. In particular, he highlighted the establishment of the Presidential Commission on Deaths and Disappearances, few days after President Ibrahim Mohamed Solih assumed office, as a demonstration of the Government’s political will to ensure the delivery of justice for all. The Presidential Commission is currently investigating the cases of the disappearance of a Maldivian journalist and the murder of a local blogger. Minister Shahid also mentioned the recent reconstitution of the Maldives Broadcasting Commission mandated to guide the media on responsible journalism as opposed to penalising them arbitrarily.

Minister Shahid further expressed concern over the impacts of the COVID-19 pandemic on media freedom. He called on the international community to redouble their efforts to protect journalists worldwide and to ensure their work continues without fear and reprisal. Minister Shahid also condemned the atrocities committed against journalists causing them to lose their lives and livelihoods. He finally concluded his remarks by echoing the following words of President Ibrahim Mohamed Solih “To ensure the rights of the people, it is better to have a free press without a Government than to have a Government without a free press.”

The Media Freedom Coalition was formed in July 2019 at the Global Conference for Media Freedom and is a partnership of countries working together to advocate for media freedom and safety of journalists and hold to account those who harm journalists for doing their job. The Coalition’s raison d’etre is to defend media freedom where it is under threat. Today, the Coalition has developed into a partnership of 38 countries. Maldives became a member of the Media Freedom Coalition on 11 July 2019. Maldives is also a member of the Coalition’s Executive Group, along with the United Kingdom, Canada, the United States, Latvia, Germany, Ghana and the Netherlands.