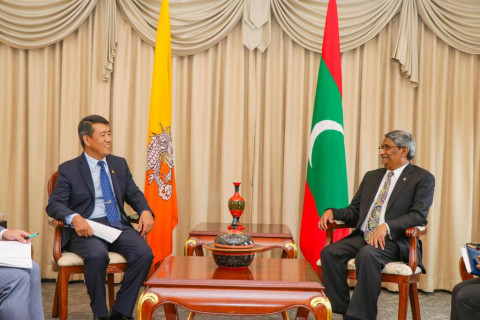 The new Ambassador of the Kingdom of Bhutan, His Excellency Rinchen Kuentsyl paid a courtesy call on His Excellency Ahmed Khaleel, Minister of State for Foreign Affairs, today.

During the meeting held at the Ministry of Foreign Affairs, State Minister Khaleel congratulated the Ambassador Kuentsyl on presenting his credentials to President Ibrahim Mohamed Solih, and expressed his confidence that the relations between the two countries will be further reinvigorated during his tenure.

State Minister Khaleel noted that Maldives values the traditionally close and friendly ties with Bhutan and expressed interest to widen the scope of collaboration between the two countries in areas of mutual interest. State Minister Khaleel and Ambassador Kuentsyl agreed on the importance of people-to-people engagement in strengthening bilateral ties, and exchanged views on working more closely in the sectors of health, tourism, youth and sports development and climate change.

Thanking State Minister Khaleel for the warm welcome, Ambassador Kuentsyl conveyed his commitment to work with the Government of Maldives to enhance the relations between the two countries in both the bilateral and multilateral spheres, for the benefit of the people of Maldives and Bhutan.