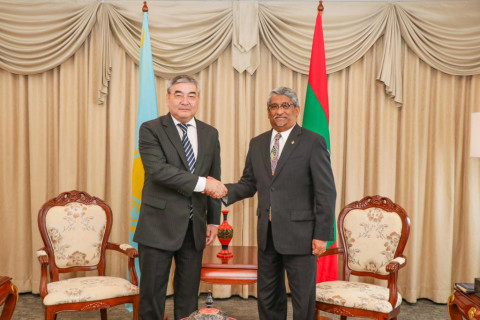 The newly appointed Non-Resident Ambassador of the Republic of Kazakhstan to Maldives, His Excellency Mr. Nurlan Zhalgasbayev paid a courtesy call on the Minister of State for Foreign Affairs, His Excellency Ahmed Khaleel today, following the Presentation of Credentials to His Excellency President Ibrahim Mohamed Solih, at a ceremony held at the President’s Office this morning.

At the meeting held in the Ministry of Foreign Affairs, State Minister Khaleel congratulated Ambassador Nurlan on his appointment and exchanged views on further consolidating the close bilateral ties that exist between the two countries. The two countries also agreed to increase its dialogue in the international sphere, and to cooperate more closely on issues of mutual interest.