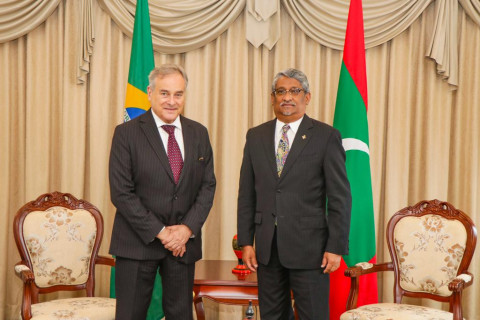 The new Ambassador of Brazil to the Maldives Sergio Luiz Canaes called on the Minister of State for Foreign Affairs Ahmed Khaleel, today.

During the meeting held at the Ministry of Foreign Affairs, State Minister Khaleel congratulated Ambassador Canaes on his appointment and discussed avenues for strengthening relations between the two countries.

State Minister Khaleel also thanked the Ambassador and the Government of Brazil for the generous donation of 82,390 doses of life saving vaccines for children. These vaccines, which are scheduled to arrive in the coming months, will support the national immunisation programme of the country.

State Minister Khaleel and Ambassador Canaes further reflected on the strong cooperation between the two countries in the multilateral fora.