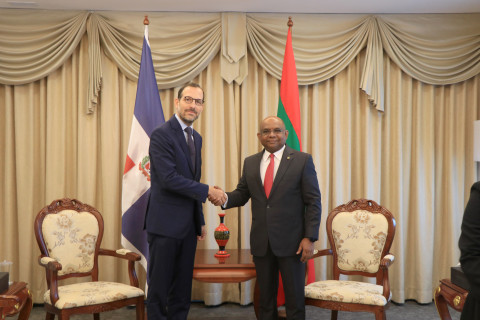 The newly appointed Ambassador of the Dominican Republic to the Maldives, David Puig, made a courtesy call on the Minister of Foreign Affairs of the Maldives, Abdulla Shahid, today.

During the meeting held at the Ministry of Foreign Affairs, Minister Shahid congratulated Ambassador Puig on his appointment and discussed avenues for strengthening bilateral relations between the two countries in areas of mutual importance such as visa facilitation, and environment and climate change. Minister Shahid and Ambassador Puig also reassured commitment to enhance cooperation in the multilateral arena.