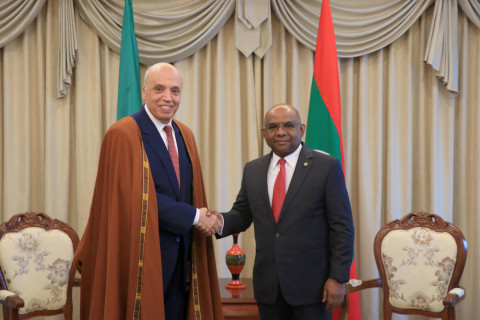 The newly appointed Non-Resident Ambassador of the People’s Democratic Republic of Algeria to the Republic of Maldives, Abderrahmane Benguerrah has paid a courtesy call on the Minister of Foreign Affairs, Abdulla Shahid, today.

During the meeting held at the Ministry of Foreign Affairs, Minister Shahid welcomed Ambassador and congratulated him on presenting credentials as the Non-Resident Ambassador of Algeria. Highlighting the long-standing bilateral relations between the Maldives and Algeria, Minister Shahid and Ambassador Benguerrah exchanged ideas to further deepen the bilateral ties, cultural exchanges and people-to-people contact between the two countries.

Ambassador Benguerrah thanked the Minister for the warm welcome, and conveyed his strong commitment to working closely with the Government and people of the Maldives to further enhance collaborations between the two countries.