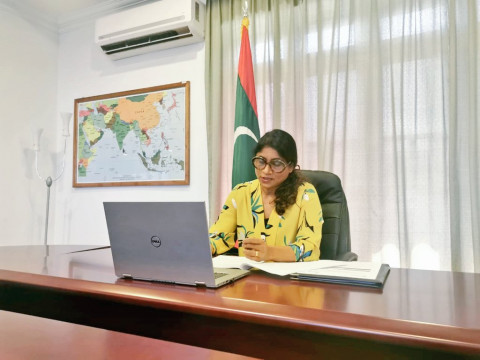 In her speech, Minister Mariya thanked the Maldives’ neighbors, the UNODC and the donor Germany, for the timely endeavor to set up a South Asian Regional PVE Network, and for trusting the Maldives with the huge responsibility of being the Network’s first host country. Minister Mariya said, as terrorism and violent extremism continue to thrive in fertile grounds across the globe even in these pandemic-stricken times, there is a pressing need for joint efforts to tackle the menace.

Reiterating President Ibrahim Mohamed Solih’s unstinting commitment to a zero-tolerance policy against terrorism and violent extremism, Minister Mariya noted that the Government of Maldives has doubled its efforts to improve national readiness and preparedness against terror, with the National Terrorism Response Plan and the National PCVE Action Plan in place and ongoing efforts led by the National Counter-Terrorism Center.

Noting that the Maldives is welcoming back visitors, the Minister reassured the international community that terrorism is and has always been alien to the Maldives’ national character, and that, Maldivians are still as warm and peace-loving as they have known to be since time immemorial.

She also expressed hope that the Regional Network would be an effective virtual coalition-building space for all governmental and non-governmental practitioners and stakeholders to share knowledge, information and best practices, in a world where enhanced cooperation and intelligence-sharing is the way forward.