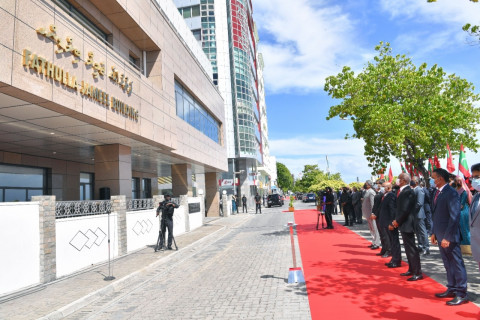 A Special Ceremony was held this morning, to dedicate the Ministry of Foreign Affairs building in memory of the late Uz. Fathulla Jameel, Order of the Distinguished Rule of Izuddin (O.D.R.I). The honour was solemnised by the President of the Republic of Maldives, His Excellency Ibrahim Mohamed Solih who unveiled the name of the building as “Fathulla Jameel Building” as well as a special plaque placed inside the building, in recognition of Uz. Fathulla Jameel’s long and distinguished service to the nation.

Speaking at the ceremony, President Solih said that today was historic day for the Maldives Foreign Service, following the renovation of the foreign ministry building which had been underway since 2019. The President congratulated the Foreign Service and its members for their hard work, dedication and undeterred commitment to serve, even during the most arduous times in the midst of a pandemic, to ensure that the Maldives engaged globally to secure vital supplies, medical equipment and most importantly, vaccines. He thanked the current Foreign Minister, His Excellency Abdulla Shahid, for his leadership of the Service during his tenure and reaffirmed his confidence in Minister Shahid for his invaluable efforts in engaging with the international community and in further enhancing the Maldives’ own diplomatic outreach and its relations with the outside world.

Minister Shahid thanked President Solih for his decision to honour the life of Hon. Fathulla Jameel. He praised former Minister Fathulla Jameel as a visionary whom he had the honour of serving with as a junior Foreign Service Officer. He said that the foundations of the modern Maldivian Foreign Service was established and promoted by Fathulla Jameel, who always believed that a small country like the Maldives, should have a professional, skilled and efficient diplomatic service that could promote international relations, trade, tourism and our interactions with the international community.

The twin daughters of the late Uz. Fathulla Jameel, conveyed a video message on behalf of the family, that expressed the importance their late father attached to the Maldives Foreign Ministry and the Maldivian Foreign Policy during his long and illustrious tenure. Today’s ceremony was also attended by the Vice-President His Excellency Faisal Naseem, Chief Justice Uz. Muthasim Adnan, Deputy Speaker of the People’s Majlis Hon. Eva Abdulla, members of the Cabinet, the Diplomatic Corp, former and present members of the Maldives Foreign Service.