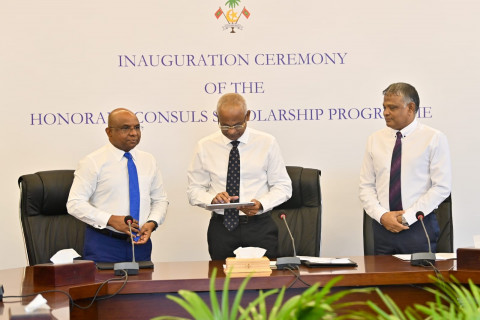 Under this landmark programme a total of 44 Scholarships from 7 Honorary Consuls will be offered in various fields and in line with the Presidential pledge to raise academic capacity, training and skills development. It includes opportunities to study in India, Thailand, Pakistan, Türkiye, Lebanon and Germany.

President Solih noted this new initiative will give renewed momentum in the ambitious development agenda of the Government of Maldives to pave way for Maldivian youth to pursue Higher Education across the globe.

Minister Shahid thanked all the Honorary Consuls who joined the initiative and highlighted that these Scholarships will open new avenues for Maldivian youth to advance their education and gain experience through training opportunities. Minister Shahid also thanked Honorary Consuls for their active support in the socio-economic development of Maldives and expressed hope for more participation for the Programme in years to come.

In his remarks, Minister Dr. Ibrahim Hassan envisions more opportunities from the network of Honorary Consuls for the development of a skilled generation of youth, especially in the area of critical thinking and creativity. Speaking as the Dean of the Honorary Consuls of Maldives, Mr. Sanan Angubolkul, Honorary Consul General of Maldives in Bangkok, Thailand, reiterated the importance of education and supporting youth through new avenues for higher education for Maldivian youth. As a contributor to the Scholarship Programme, Dr Joseph Vayalil George, Honorary Consul General of Maldives in Bengaluru, India also delivered brief remarks at the ceremony, highlighting the upward trajectory of the education sector in the Maldives and also reflected on the close relations with the Maldivian students in Bengaluru.

In her closing remarks, Dr. Hala Hameed, Secretary Multilateral, mentioned that this is only the beginning, and that the Ministry of Foreign Affairs will continue to expand this programme bringing forth more scholarships for Maldivian students through the generous assistance of Honorary Consuls.