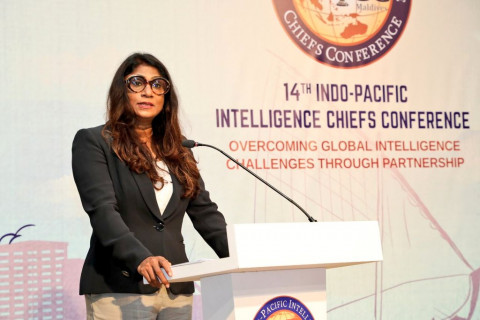 Minister of Defence Uza. Mariya Didi has said that Strategic Intelligence is a vital component of the Global Security equation, as it is the discipline that provides guidance and direction to policy-makers, and shapes people’s choices and destinies.

The Minister made the statement on Monday morning in her opening remarks at the 14th Indo-Pacific Intelligence Chiefs Conference which was held at Kurumba Maldives from 6 to 8 September, under the theme “Overcoming Global Intelligence Challenges Through Partnerships”, and attended by Intelligence Chiefs from over 20 partner states.

In her remarks, the Minister noted that while some fundamental strategic paradigm shifts have taken place even regionally, the shifts are necessary, given the strategic imperatives, economic significance and the sheer human potential within the Indian Ocean region – home to over 2 billion people and the major sea routes of the world.

Minister Mariya highlighted the pressing need for greater partnerships through dialogue, quoting President Ibrahim Mohamed Solih’s remarks at the 74th Session of the UN General Assembly, where the President expressed Maldives’ intention to be a good international partner in bringing about a shared solution to global issues from terrorism to climate change, and in intelligence-sharing, counterterrorism training and best practice sharing, through concerted global action.

The Minister also highlighted the security challenges posed by the unique island geography of the Maldives, which is both compressed and dispersed at the same time, with water forming 99.7 percent of the nation’s territory.