News Climate security is an area where the stakes are high for small, low-lying island states like Maldives" - Minister Mariya 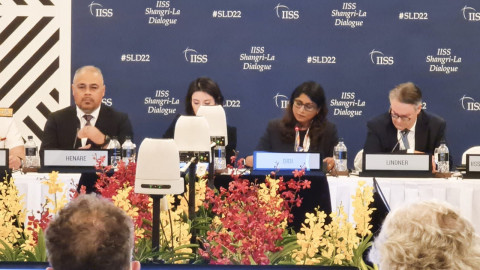 Minister of Defence Uza. Mariya Didi has said that, climate security is an area where the stakes for small, low-lying island states like the Maldives are high.

The Minister made the remarks whilst addressing the Special Session on Climate Security and Green Defence at the 19th Asia Security Summit – the IISS “Shangri-La Dialogue” in Singapore.

In her remarks, Minister Mariya said with 99.7 percent of the Maldives being water, most islands rising barely 3 feet above the sea level, and over 70 percent of the nation’s infrastructure and 50 percent of its urban areas located within 100 meters from the sea, climate security is critical for the country's existence.

Minister Mariya highlighted that President Ibrahim Mohamed Solih has established a razor-sharp focus on Maldives’ climate change fight on the global stage, despite growing security worries and the challenges of keeping Maldives on the track of democratic consolidation.

“For small low-lying island states, climate change is an existential crisis. The cost of failure is unfathomable. For this highly informed audience, there is perhaps nothing new in what I have said. What may be new is our level of despair. In spite of the odds stacked against us, we Maldivians are a resilient people. We come from the majestic, life-giving Indian Ocean. And we are trying our best to adapt to its changing currents. We need our partners to assist us in this effort. We cannot afford to sit back and watch as the future of our upcoming generations slips into uncertainty. We cannot fail them before they even have a chance,” concluded Minister Mariya.