News “It is the inherent nature of Maldivians to pursue peace, harmony and friendly cooperation with all nations” - Minister Mariya 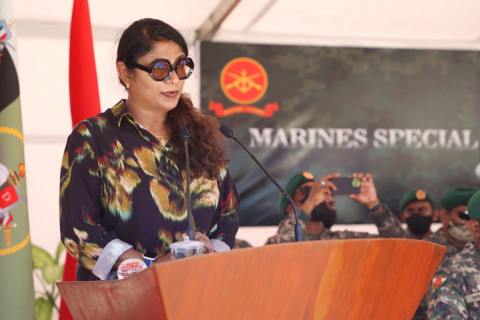 Minister of Defence Uza. Mariya Didi has said that, it is the inherent nature of Maldivians to pursue peace, harmony and friendly cooperation with all nations.

The Minister made the statement while addressing the closing ceremony of MNDF’s Marine Corps Special Operations Group (SOG) Qualification Course in Girifushi.

In her speech, the Minister highlighted that, since time immemorial, Maldivians have been a peace-loving people, who have pursued their own best interests, through the spirit of friendly cooperation and harmony with all nations of the world. Minister Mariya noted that the quintessential peace-loving and cooperative nature of Maldivians is the secret behind the preservation of Maldivian independence, sovereignty, security and stability over the years, and is the basis for His Excellency President Ibrahim Mohamed Solih’s Policy of International Defence Diplomacy and Cooperation.

Minister Mariya thanked President Solih for the Commander-in-Chief’s committed efforts and special attention to the fulfillment of MNDF’s needs, including the provision of more training opportunities for MNDF soldiers and sailors both at home and around the globe, despite COVID-19.

Minister Mariya gratefully acknowledged the immeasurable sacrifices of the families of MNDF soldiers and sailors, and thanked them for their patience, understanding and unwavering support to the Defence Forces.

The Special Operations Group (SOG) was formed as a special unit under MNDF Marine Corps, as part of a series of reforms being brought to MNDF’s operational structure, for combatting terrorism and Direct Action operations. The SOG will work in tandem with MNDF Special Forces.