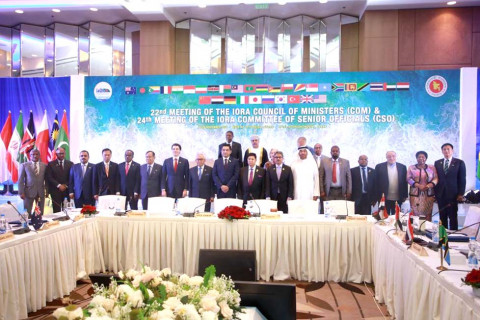 Minister of State for Foreign Affairs His Excellency Ahmed Khaleel today participated in the 22nd Meeting of the Council of Ministers of the Indian Ocean Rim Association (IORA) held in Dhaka, Bangladesh. The meeting held under the theme “Harnessing the opportunities of the Indian Ocean sustainably for inclusive development” was hosted by the current Chair of IORA, the People's Republic of Bangladesh.

The meeting brought together Ministers from the 23 Member States of IORA in which they reiterated their commitment to “supporting IORA to play a significant role in promoting sustainable and inclusive development in the Indian Ocean through constructive dialogue and concerted efforts as well as to address challenges and key issues in collaboration with Dialogue Partners”. The Dhaka Communiqué was adopted at the end of the meeting.

In his statement to the Council of Ministers, State Minister Khaleel drew attention to the risks and exposure that Small Island Developing States face due to the effects of climate change. He also called upon Member States to share experiences and technologies, pass knowledge and to work together to protect the environment of the Indian Ocean.

State Minister Khaleel further noted the firm commitment of the Maldives to the common principles enshrined in the IORA Charter and called on Member States to revive the true spirit of regional cooperation.

IORA is a leading inter-governmental organization formed in 1997 to enhance regional and socio-economic cooperation and development among the Indian Ocean Region countries. The Maldives formally joined IORA on 8 November 2019, as its 22nd Member State. The 22nd Council of Ministers meeting was preceded by the 24th Committee of Senior Officials meeting that took place in Dhaka from 22-23 November 2022.