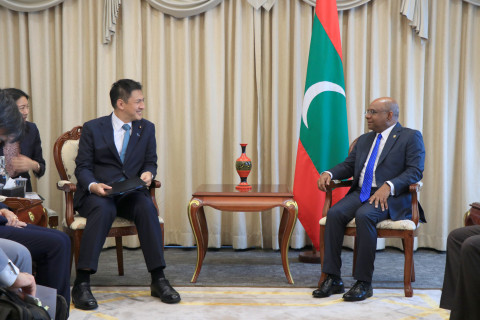 During the meeting held at the Ministry of Foreign Affairs, Minister Shahid welcomed State Minister Takei Shunsuke to the Foreign Ministry, and highlighted the enduring strength of the Maldives-Japan ties and the close people-to-people contact that form the foundation of the bilateral relationship.

Minister Shahid and State Minister Shunsuke reflected on the close historical relationship between Maldives and Japan, and exchanged views on key areas of bilateral and multilateral interest. In commemoration of the 55th anniversary of the establishment of diplomatic relations between the two countries, both Minister Shahid and State Minister Takei Shunsuke reaffirmed their commitment to further enhance the partnership bilaterally, within the bilateral and multilateral frameworks.