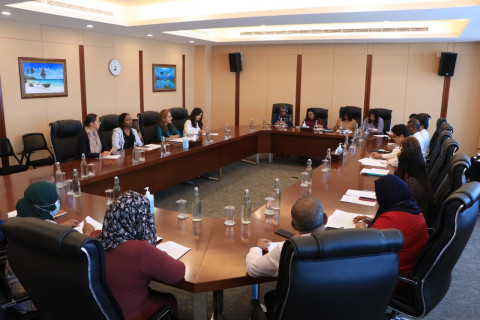 Following the conclusion of their visit to the Maldives, that took place from 11-22 September 2022, the Working Group on Discrimination Against Women and Girls held a briefing session today, for relevant stakeholders,

During the session the Government expressed gratitude to the Working Group for accepting its standing invitation to all human rights special procedures mandate holders, to visit the Maldives. Ms. Melissa Upreti, Chair-Rapporteur of the Working Group thanked the Government for extending the invitation and for the cooperation and support provided to her and her team throughout their visit.

In today's session, the Working Group briefed the representatives from Government ministries and other relevant stakeholders present, on the preliminary findings of their visit. The Working Group positively noted the progress achieved by the Maldives in the scope of their work, especially the Gender Equality Act, the Maldives’ positive engagement in the UPR process, the creation of the National Mechanism for Reporting and Follow-up, as well as the formulation of the National Gender Equality Action Plan. The Working Group also noted a number of areas that require action on the part of the Government in order to further improve the conditions for women and girls.

The Working Group will present its final report on this visit, to the UN Human Rights Council in June 2023. The Maldives will endeavour to deliver on the recommendations and respond to any further queries by the Working Group and other UN bodies.

The UN Working Group on Discrimination Against Women and Girls is the second special procedures mandate holder of the UN Human Rights Council to visit the Maldives this year. Earlier this year, Ms. Fionnuala Ní Aoláin, UN Special Rapporteur on the Promotion and Protection of Human Rights and Fundamental Freedoms while Countering Terrorism visited the Maldives from 15-24 May 2022.

Maldives first extended a standing invitation to all thematic special procedures in 2006 and later reaffirmed this standing invitation in 2019. Since then, the UN Special Rapporteur in the Field of Cultural Rights, Ms. Karima Bennoune, the UN Special Rapporteur on Torture and Other Cruel, Inhuman or Degrading Treatment or Punishment, Mr. Nils Melzer and the Working Group on Arbitrary Detention has undertaken visits to the Maldives.

The UN Working Group on Discrimination Against Women and Girls is a special procedures mandate holder of the UN Human Rights Council that was first established in 2010, on the issue of discrimination against women in law and in practice. The Working Group is composed of five independent experts of balanced geographical representation, working collectively as a group and producing work in the name of the mandate.