Maldives is hosting the 5th Edition of Colombo Security Conclave 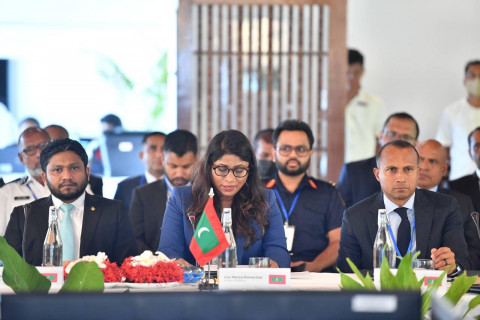 The 5th Edition of Colombo Security Conclave (CSC) begins in the Maldives.

The two-day Conclave, being hosted by Maldives, is attended by National Security Advisors and Representatives from India, Sri Lanka, Maldives, Mauritius, Bangladesh and Seychelles.

The Colombo Security Conclave was founded as a trilateral security framework between India, Sri Lanka and the Maldives with four pillars of security cooperation, covering marine safety and security, human trafficking, counter-terrorism, and cyber security.

In her remarks at the opening ceremony, Minister of Defence Uza. Mariya Didi reiterated President Ibrahim Mohamed Solih’s commitment to the peace, security and stability of the region and the Government's view of Colombo Security Conclave, despite its infancy, as a meaningful construct to tackle many of the pressing challenges we face.

The Minister welcomed Mauritius as the latest Member State to the Conclave, increasing its membership to 4, and expressed hope that the Observer States will join the Conclave soon.

Highlighting the regional security challenges facing the Maldives such as narco-trafficking, human trafficking, piracy, IUU fisheries, counterterrorism and violent extremism, Minister Mariya noted that while there is no recorded case of any Maldivian entering a designated conflict zone as a Foreign Terrorist Fighter in the last 3 years, the assassination attempt on the Speaker of People’s Majlis last year was a wakeup call for all.