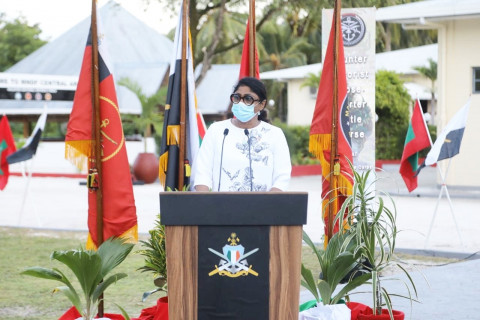 Addressing the closing of the Counter Terrorist Close Quarter Battle Course at MNDF’s Central Area Command Headquarters in L.Kahdhoo, Minister Mariya welcomed the opening of a new chapter in the Maldives-UK Defence and Security relationship, with the resumption of training programmes for MNDF soldiers after a gap of over 2 decades.

Minister Mariya reiterated President Ibrahim Mohamed Solih’s commitment to building capacity in both the prevention aspects of Counter Terrorism and in developing an effective response mechanism.

In this regard, she highlighted the Government’s National Terrorism Response Plan, which mandates the Maldives National Defence Force to lead the lethal response if the need arises.

Shedding light on the contemporary threat environment, Minister Mariya noted that in a world where terrorism is both transnational and networked in nature, enhanced intelligence-sharing and cooperation is the way forward for a safer and more peaceful global community.

Stressing the link between the tourism-powered economy of the Maldives and the culture of hospitality, warmth and peace offered by its people and islands, Minister Mariya emphasized the importance of training and preparing the nation’s soldiers against any threat, so as to ensure the perpetual safety of all visitors and citizens.