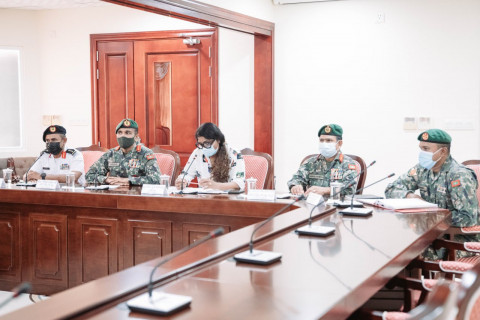 During the meeting, Minister Mariya and the MNDF contingent provided detailed information in accordance with the Committee’s request. The Uthuru Thila Falhu (UTF) project is one amongst the 10 areas for cooperation outlined in the “Action Plan on Defence Cooperation between Maldives and India”, signed during former President Abdulla Yameen Abdul Qayoom’s visit to India from 10-11 April 2016. The steps taken by the present Government so far in furtherance of Maldives-India defence cooperation are pursuant to the said Action Plan.

For several years, the MNDF Coast Guard had been in dire need of an indigenous dockyard and harbor. The main reasons revolve around the Coast Guard’s primary functions which include the defence of maritime borders, the provision of civil defence and emergency response and the performance of constabulary duties to ensure maritime safety in a nation whose territory is 99.7 percent water. While vessel repair and maintenance are key components of a maritime support system, at present, major repairs and refits of Coast Guard vessels, including “CGS Huravee”, are done abroad, leaving the vessels non-operational for a long period. While Coast Guard vessels are berthed and moored in high civilian traffic areas and inadequate berthing facilities limit scope of shore supply and lead to extra costs, harboring in civilian areas poses security and safety risks.

During the meeting, Minister Mariya noted that it is for the said reasons and in light of the extreme necessity for an indigenous harbor and dockyard that successive governments since 2013 have made efforts to find an appropriate solution to the matter, and enforce the 2016 Action Plan.

The Minister noted former Minister of Defence and National Security Colonel Retired Mohamed Nazim’s visit to India in April 2013, former Minister of Foreign Affairs Dunya Maumoon’s Joint Commission meeting with the Indian External Affairs Minister Sushma Swaraj in 2015, former Minister of Defence and National Security Adam Shareef Umar’s assigned responsibility over the enforcement of the 2016 Action Plan, and efforts by the present administration, as proof of the persistent need and absolute necessity for the Coast Guard to have its own dockyard and harbor, in the interests of time, cost-saving and more importantly, security.