Golden Jubilee of Maldives Membership at the UN 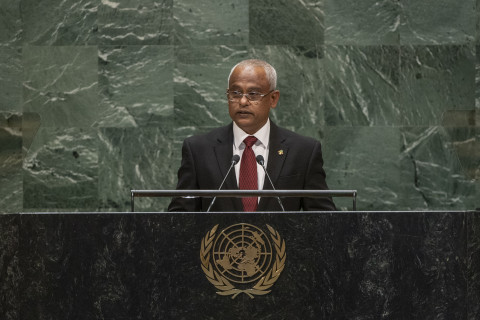 21 September 2015 marks the fiftieth year of Maldives Membership at the UN. In 2015, Maldives also marks its Golden Jubilee of Independence. This paper outlines how the UN Division will work to mark both these events in a significant manner.

Maldives at the United Nations

At the time of joining (Maldives presented its bid to join the UN with Singapore which gained independence in 1965 as well), there was a debate in the Security Council on whether small states like Maldives and Singapore could contribute effectively to the lofty objectives of the United Nations. However, Maldives has today upheld the ideals and norms that are enshrined in the UN Charter, as well as become an active member of the United Nations. It is on the United Nations Human Rights Council, on its second term, having been elected for the first time in 2010 with the largest number of votes ever received. Maldives also has a female judge serving as the Vice Chairperson and member of UN Sub-Committee on Prevention of Torture, committee under the Convention Against Torture., to which she was elected for a second term in 2014. It is a strong and vocal advocate for the rights of small states, climate change and sustainable development of small states. In this regard, it presented a resolution on security of small states, and on smooth transition of Least Developed Countries. It was the initiative of Maldives that led to the creation of Alliance of Small Island States in 1989. Maldives assumed leadership on the initiative on the impact on human rights due to climate change and for the first time, the linkages between human rights and climate change were addressed at the UNHRC. Moreover, Maldives led the initiative at the Council to establish an Independent Expert on Human Rights and Environment in March 2012, as well as the Voluntary Trust Fund at the council aimed to support the participation of Least Developed Countries and Small Island Developing States in the work of the Council in March 2012. Maldives will be the Chair of AOSIS in 2015-2016, where its leadership on small states and environmental issues will be highlighted. And as a culmination of 50 years of success and leadership in the multilateral arena, the Maldives has also declared its intention to run for the UN Security Council for the term 2019-2020.

"The United Nation manifests humankind’s most valued hopes for peace, security, and freedoms. In today’s world of uncertainty, senseless violence and extremism, mired by poverty, disease and pain, the United Nations’ role as the ultimate guarantor of peace and security is much valued, albeit difficult to exercise. The United Nations is a valued partner for development across the globe. And it is the Maldives’ hope that the important role that the UN can play in development, will further be exercised with the adoption of the post-2015 development agenda next year.

The Maldives’ decision to join the UN in 1965 sparked a debate on how a “micro state”, such as the Maldives, could possibly contribute to the organisation. Today, Maldives is proud to have proven the doubters wrong. The Maldives takes pride in the active and useful role it has played at the Untied Nations. It has shown that not only do small states belong, but can contribute immensely, to the work of the United Nations. Despite our size, our voice is strong and clear.

Over the years, the United Nations has remained as a strong supporter of the Maldives. As we look forward to celebrating our golden jubilee of independence next year, the Maldives reaffirms its commitment to continue its journey at the United Nations. We will continue to work with the UN to make the world a safer place and give everyone the courage to dream new dreams.

On this momentous occasion, I express my best wishes to the people of the Maldives for their achievements in the international arena. I also extend heartfelt congratulations to the Secretary General and to the United Nations for the inspiring work and collective efforts to address the new and emerging issues of this century."