The Maldives’ at the UN Human Rights Council 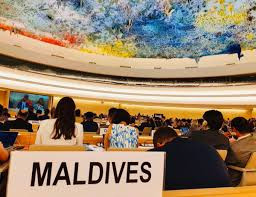 THE MALDIVES’ AT THE UN HUMAN RIGHTS COUNCIL

The Maldives was re-elected to the UN Human Rights Council for a second term for a period 2014-2016.

Since then, the Maldives is proud to have given a voice to the smallest members of the international community. It has also been a leading voice of advocacy for human rights and fundamental freedoms, spearheading important initiatives in the Council. It has succeeded in drawing global attention to the effects of climate change on the full enjoyment of human rights. It has been one of the strongest advocates at the Council for promoting the rule of law and creating the values of human rights.

Membership of the Human Rights Council: a catalyst for national action

Since the Maldives began to play a more active role in international human rights issues, particularly, since the country’s membership of the Council in 2010, the country has made remarkable progress in its efforts at promoting and protecting human rights nationally. These measures have helped to strengthen the human rights framework in the country and to introduce a rights-based discourse into political and social debates. Some of the key achievements inter alia are:

A RECORD OF ACHIEVEMENTS: BUILDING RESILIENCE

When the Maldives was elected to the Human Rights Council in 2010, it was the smallest country to occupy that seat. The Maldives stood for the voiceless, the marginalised, and the smallest countries that were on the periphery. Today, the Maldives takes pride that it has created a voice of the small island developing states (SIDS) within the Council. Moreover, the Maldives has, over the last three years, advocated for global efforts at increasing the resilience of SIDS, as well as emerging democracies, in bringing their national human rights mechanisms to international standards. Some important initiatives led and/or supported by the Maldives in this regard include:

At the national level, the Maldives would: