Maldives Chairmanship of the Alliance of Small Island States 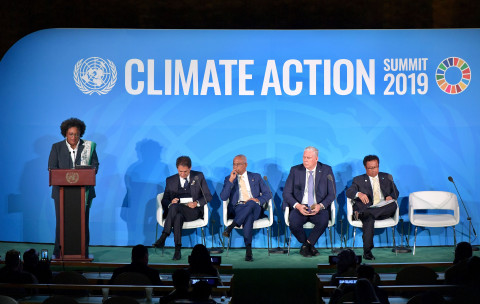 Maldives assumed the Chairmanship of the Alliance of Small Island States (AOSIS) on 1 January 2015.

During its tenure as the Chair, the Maldives will lead the voices of small island states through an year of milestones. During September 2015, the United Nations General Assembly will adopt the new development framework to follow from the Millenium Development Goals. In December 2015, the Conference of Parties to the United Nations Framework Convention on Climate Change is set to adopt a followup treaty to the Kyoto Protocol, which expires in 2020.

The Maldives spearheaded the efforts to form AOSIS, following the first ever Small States Conference held on Sea Level Rise, held in Maldives in November 1989. And in the past twenty-five years, Maldives, through national, regional and international efforts, has undertaken several intiatves and been an agent of change on a wide variety of issues related to climate change and environmental degradation. The Maldives hopes to further strengthen the character and status of AOSIS as the norm entrepreneur and bridge builder, during its term as Chair.

AOSIS is a coalition of small island and low-lying coastal countries that share similar development challenges and concerns about the environment, especially their vulnerability to the adverse effects of global climate change. It functions primarily as an ad hoc lobby and negotiating voice for Small Island developing States (SIDS) within the United Nations system.

The Maldives led its first plenary session of the Alliance of Small Island States (AOSIS) today as the new chair of the global coalition of small island and coastal nations.

“As one of the founding members of AOSIS, it is a great honour to assume this stewardship role on what is the eve of the coalition’s twenty-fifth anniversary, and also during a critical year for international efforts to address sustainable development and climate change,” said Ambassador Ahmed Sareer, the Maldives’ permanent representative to the United Nations and the group’s chair.

The country takes on the leadership role during a full calendar for the dual challenges of sustainable development and climate change, with discussions underway on defining the post-2015 development agenda and, later in the year, critical UNFCCC talks at COP 21 in Paris.

“Political momentum for action on these urgent issues is building and the Maldives is committed doing everything we can to seize this opportunity to improve the quality of life for island people and all vulnerable communities around the world.”

Geneva—At the conclusion of the United Nations climate change negotiations here, the first in a series of meetings this year designed to advance progress toward a comprehensive international agreement at the end of the year in Paris, Ambassador Ahmed Sareer, the Maldives’ Permanent Representative to the U.N. and Chair of the Alliance of Small Island States (AOSIS), released the following statement on behalf of the group:

“We leave Geneva with a lengthy text to work on in the coming months, but it importantly reflects the views and enjoys support from all Parties. After years of false starts and broken promises, restoring ownership and trust in the process is no small achievement and I think we have come a long way toward doing that.

“Our job now is to take every opportunity at the remaining meetings, and the time in between, to understand each other’s concerns and interests as we look for common ground on the road to Paris

“As representatives of some of the countries most vulnerable to climate change, including total inundation from sea level rise, our primary motivation is to make sure the global community moves as quickly as possible to cut the emissions responsible for climate change, and provides the support necessary to help vulnerable communities build sustainable futures and adapt to climate impacts that can no longer be avoided.

“Our view is that a legally binding protocol under the convention that is applicable to all Parties, and in line with keeping global temperature increase to below 1.5 degrees Celsius, is the best way to achieve that objective. Additionally, it will need to give balanced treatment to key areas, including mitigation, finance, capacity building, technology, adaptation, and loss and damage to manage impacts that can no longer be adapted to. Loss and damage is qualitatively different than adaptation and should be treated separately under the agreement.

“We certainly have our work cut out when we convene again in June, but we have made important progress here, and AOSIS is committed to working with all parties, groups, and the ADP co-chairs to transform the negotiating text into an ambitious agreement in Paris.”

ON FEBRUARY 8, 2015 AOSIS Sees Important Opportunity for Progress in Geneva

Geneva—Ahead of the opening of the international climate talks here, Ambassador Ahmed Sareer, Permanent Representative to the United Nations for the Maldives, and chair of the Alliance of Small Island States (AOSIS), a group of 44 low-lying and coastal countries that are highly vulnerable to the impacts of climate change, released the following statement on behalf of the group:

“Geneva will serve as an important mile marker for us to ensure we are on track to deliver an ambitious agreement in Paris at the end of the year. We have lot of ground to cover, but I am optimistic that the international community is prepared to do the work necessary here, and throughout the course of the year to ensure we get the job done.

“More specifically, we need to make progress in developing the fundamental building blocks of an ambitious legally binding protocol under the Convention, including:

“Mitigation: Our ambition should be in line with a long term global goal of limiting temperature rise to well below 1.5 degrees and the efforts captured in the 2015 agreement must be clearly quantifiable so that we are able to aggregate the contributions of all Parties.

“Finance: Means of implementation is essential to the 2015 agreement, and therefore it must contain commitments by developed country Parties and provisions to ensure scaled-up, adequate long term, predictable, new and additional finance to support mitigation and adaptation to the adverse effects of climate change in developing countries. This should complement other necessary means of implementation including technology transfer and development and capacity building.

“The new agreement should also address the gaps of the current climate finance architecture and flows, including the shortage of funding for concrete adaptation in most vulnerable countries and the barriers to access resources for those capacity-constrained countries. Both public and private flows towards low-emission and climate-resilient sustainable development have to be scaled-up urgently and public financing should be made available for adaptation.

“Loss and Damage: Permanent losses and damages due to the impacts of climate change are a reality for AOSIS and thus a central part of building a successful 2015 agreement. The negotiation warrants specific discussion in a separate session. The Warsaw International Mechanism on loss and Damage established at COP 19 must be anchored under the new agreement.

“Reports from scientists that last year was the hottest on record and that sea level rise is accelerating around the world, remind us of the need to take urgent action. At the same time, we have watched international momentum build toward reaching an agreement in Paris. AOSIS looks forward to working with all of our partners to ensure this opportunity does not slip away.”

I have the honor to speak on behalf of the Alliance of Small Island States, a coalition comprising 39 small island states and coastal communities. We align ourselves with the statement delivered by the distinguished Permanent Representative of South Africa on behalf of the Group of 77 and China.

At the outset, let me express my appreciation for your diligent work. It is not easy to reflect the many diverse interests represented in this room and we commend you on the transparent and inclusive manner with which you have conducted this process from the start.

Small Island Developing States have been recognised as a special case for development by the UN system, and by the entire world. The inherent vulnerabilities associated with our remoteness pose specific and unique challenges to development, such as distance to markets, achieving economies of scale, high costs of transport and extreme vulnerability to shocks, and therefore require specific assistance that is targeted.

Three years ago, when we agreed to start negotiations on a global development agenda that would follow the Millennium Development Goals, we envisioned a future that put people at the centre of sustainable development. And to “strive for a world, that is just, equitable and inclusive.” Therefore, any agenda that purports to be universal must recognise that SIDS remain a special case for sustainable development in view of their unique and particular vulnerabilities. And this consistency must be maintained throughout the document. A coherent and coordinated approach must be adopted, to improve and strengthen the United Nation’s overall effectiveness and delivery to SIDS, to make the UN system “fit for purpose”.

It is a consequential time in our work to develop our economies sustainably and create opportunities for so many people to reach their full potential. Our work on the Post-2015 development agenda, of course, is well underway and over at the climate change negotiations, the international community is making progress toward signing a much-anticipated climate treaty at the end of the year in Paris.

We are reminded continuously of the urgency we face. This week, scientists reported that 2014 was the hottest year on record, validating that the Earth is warming and the climate is changing in response to the rising levels of greenhouse gas emissions in the atmosphere. The latest synthesis report of the IPCC confirmed that the effects of climate change were getting worse under all modelling scenarios, and that SIDS are at the forefront of these effects. In a separate report, scientists also reported that humans are on the verge of causing unprecedented damage to the oceans and those animals living in them.

Both Climate Change and Oceans are goals that SIDS have fought hard to have in the Sustainable Development Goals. Climate change presents an existential threat. It is a major obstacle in achieving our sustainable development goals, particularly for SIDS who are so vulnerable to sea level rise and so dependent on healthy oceans for our livelihoods. As custodians of vast expanses of oceans, our economies, our development is unavoidably tied with oceans and the organisms that live within it.

This is why we reiterate that the Report of the OWG on Sustainable Development Goals as highlighted in UNGA Resolution 68/309 shall serve as the basis for integrating sustainable development goals into the post-2015 development agenda. We do not support any reopening or renegotiating of the number and nature of the goals.

The success of the development agenda will undoubtedly depend on the provision of Means of Implementation that are adequate, sufficient and predictable. It will also depend on a robust global follow up system to strengthen monitoring and review of implementation at all levels, and we wish to emphasize here the critical role of the High Level Political Forum.

To be most effective, it is critical that the process and outcomes of Post-2015 development intergovernmental negotiations, those of the third international conference on financing for development (FfD), the third world conference on disaster risk reduction, and the UNFCCC, complement each other and build on their natural synergies.

AOSIS remains committed to work with the international community to ensure that a robust post-2015 development agenda is formulated and implemented. We hope that our opinions, our views and our voices have been heard loud and clear.